What is Mayflower Mountain Resort? 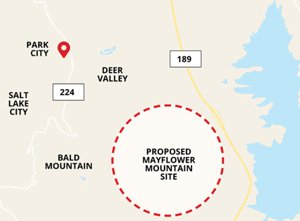 The plans for this development, located between Deer Valley and the Jordanelle Reservoir, accessible by Highway 40, have long been in the works.

The long-held belief was that Mayflower would eventually serve as another base area for Deer Valley, but as of today, there is no agreement between Mayflower’s developer, Extell Development Company, and Deer Valley’s owner, Alterra Mountain Company, allowing the two resorts to operate as one.

The two ownership entities recently signed a 199-year lease, which, at a minimum, enables skiers to access terrain at Deer Valley the same way they always have from U.S. 40, and enables a connection between the two resorts should the parties come to a future agreement.

WILL MAYFLOWER BE PART OF DEER VALLEY?

Mayflower’s 400 skiable acres are enough to operate an independent ski area, though it pales in comparison to the 2,000 plus acres of terrain at Deer Valley. 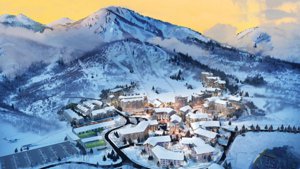 From a skier’s perspective, the limited area makes far more sense as an addition to Deer Valley than it does as a standalone destination.

Extell and Alterra don’t view joint operation as a certainty, as no funding from Deer Valley is being used to finance any of the infrastructure at Mayflower. With lifts still a couple seasons away from turning, we’ll wager the two areas will operate as a de facto singular entity. The layout makes far too much sense to ignore, and the overwhelming trend in the ski industry is towards consolidation of mountain operations.

How Deer Valley’s prohibition of snowboarders will factor in the decision is also unknown.

MAYFLOWER WILL HAVE MUCH TO OFFER

The plans for the base area of Mayflower Mountain Resort are beginning to take shape. Extell is planning a massive development that includes three hotels, a convention center, and the world’s largest ski beach along with a 68,000-squarefoot public recreation center, and an array of shops, restaurants, and bars. 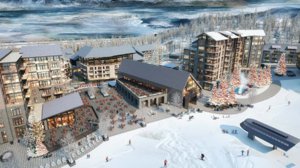 Mayflower’s financing, in part, comes from the Military Installation Development Authority’s (MIDA) participation. The financing structure allows more money to be spent during the initial stages of development, which will ultimately be paid by leveraging future tax growth.

Thanks to MIDA funding, the first hotel built at Mayflower will feature 100 rooms exclusively available for military personnel at subsidized rates.

This is an article from our December 2019 newsletter, the Park City LINK. Click here to learn more about the Park City community and how The Wilstein Team can help you with your Park City real estate buying and selling needs.

Articles in this issue: